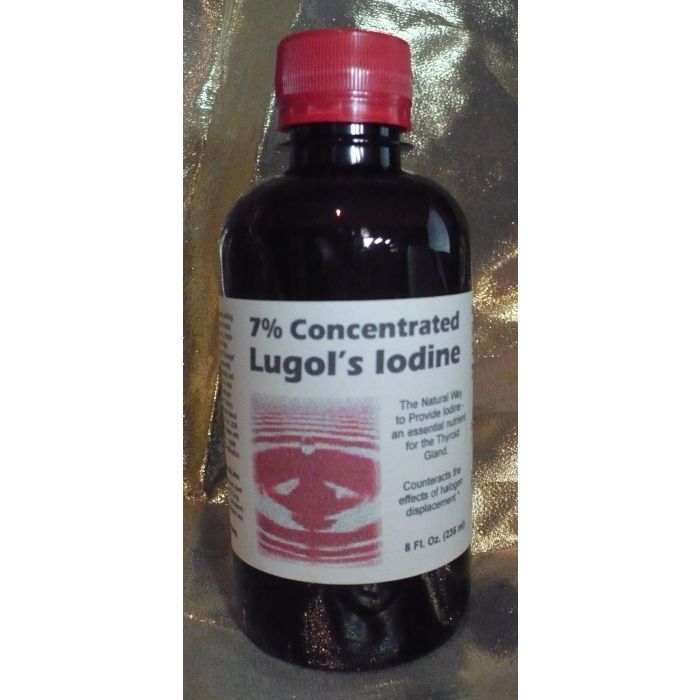 The amount of iodine necessary to void diagnosable deficiency is quite small. Below, for example, we provide the U.S. Recommended Daily Allowance for iodine in mcg.'s.

But many ocean-bearing iodine-rich foods are now unavailable, and agricultural farmland is increasingly iodine-deficient, leading to reduced levels of iodine in foods. Other areas, such as the Great Lakes region in the U.S., are naturally deficient in iodine -- a fact that lead to the massive goiter in the 1930's, when 40% of the people living in Michigan suffered from goiter.
In 1924, iodine was first added to table salt as a preventative measure, and by 1940, the practice was in general consumer use. Using iodized salt has, no doubt, been effective: it contains about 76 mcg. of iodine per gram. The average person consumes at least 3 grams of iodized salt daily, exceeding the RDA for iodine by 150 mcg. However, iodized salt has many other drawbacks: it contains aluminum and processing chemical residues, its overuse creates the well-documented conditions associates with high sodium intake and sodium-potassium imbalance, etc. With treated salt's convenient little addition to the Western diet - its integration accelerated by the explosive expansion of fast food outlets, at which table salt's cup doth overflow, one might think we have seen the last of iodine deficiency. Hardly.
Enter "halogen displacement" and the effects of chlorine intake on the body's small reserve of iodine. Table salt, by definition, is mostly "sodium chloride" (what chemists call a "halide" - or a halogen tied to a mineral, making it a "salt" of a halogen). Although bound to sodium, the use of table salt as a delivery vehicle for iodine ironically presents a situation where you ingest far more chlorine, which displaces iodine (as we will see in a moment) than you do the iodine itself.
You see, chlorine, which has been used extensively since 1904 to control microbes in public drinking water, belongs to the same class of elements as iodine: the "halogens" - or elements that are one step removed from the "inert elements" (or gases) because they have just one electron missing from their outer shell to make it inert (non-reactive). This makes them quite readily reactive.
The mechanism behind "halogen displacement" was probably best described by J.C. Jarvis, M.D. (

, Henry Holt & Co., 1958, HB, p. 136), who wrote: “The clinical activity of any one of these four halogens is in inverse proportion to its atomic weight. This means that any one of the four can displace the element with a higher atomic weight, but cannot displace an element with a lower atomic weight. For example, flourine can displace chlorine, bromine and iodine because flourine has a lower atomic weight than the other three. Similarly, chlorine can displace bromine and iodine because they both have a higher atomic weight. Likewise, bromine can displace iodine from the body because iodine has a higher atomic weight. But a reverse order is not possible. A knowledge of this well-known chemical law brings us to a consideration of the addition of chlorine to our drinking water as a purifying agent. We secure a drinking water that is harmful to the body not because of its harmful germ content but because the chlorine content now causes the body to lose the much-needed iodine...”
To counter the effects of iodine loss, Dr. Jarvis recommended various methods including: (1) Eating foods rich in iodine: food from the ocean, radishes, asparagus, carrots, tomatoes, spinach, rhubarb, potatoes, peas, strawberries, mushrooms, lettuce, bananas, cabbage, egg yolk, and onions; (2) Painting a small area of the body with tincture of iodine; and (3) taking preparations known to be rich in iodine, including cod liver oil, kelp tablets ...
But he was particularly keen on the power of Lugol's iodine, for treating various illnesses, including colds and flu, and for countering the effects of stress: “Supposing you do follow the suggestions outlined above and find that some weeks the pressures of your private and your business life are causing you to lose the ability to bounce back. Then you should add a drop of Lugol's solution of iodine to your glass of apple or grape juice at breakfast, or you may take it in the mixture of apple cider vinegar and water. The point is that the potassium in the solution blocks off the body mechanism that organizes for aggressive action, releasing its hold on the body when opportunity for rest and relaxation arises. The iodine swings into action the body and the building up and storing of body reserves. When working under pressure, include the Lugol's solution dose each day until the period of pressure passes. If it should happen that your body becomes saturated with iodine, you will find that there is an increase of moisture in the nose. If this occurs, omit the iodine until the nose is normal.” Read directions thoroughly before use.

The role of iodine in human nutrition is well-established - as are its deficiency diseases and the conditions to which its deficiency can contribute (i.e. goiter, cretinism, hypothyroidism, etc.)

The following information is taken directly from our Lugol's label. Please keep in mind that your dosage is dependent on whether you are using Lugol's as a supplement, or for therapeutic purposes and/or at the advice of a medical practitioner: Supplemental Dosage (3%): One drop (roughly 1.45 mg: see panel at left for calculation). Directions: Take one drop per daily for general health. In times of bacterial or viral infection, take three tsp. (145 mg.) three times per week (i.e Monday, Wednesday, Friday), or as recommended by your health care practitioner. Take Lugol’s on an empty stomach about 20 minutes before eating in an 8 oz. (236 ml.) glass of distilled or purified water with one teaspoonful of apple cider vinegar added for slight acidification. * For U.S. Users: These statements have not been evaluated by the Food & Drug Administration. This product is not intended to diagnose, treat, cure or prevent any disease. SHAKE WELL BEFORE USING. Supplement Facts: Serving size: one (1) drop. Servings per container: 5,676. Ingredients: Distilled water, potassium iodide, iodine crystal. Warning: All iodine products can be toxic, or even deadly, if taken in excessive amounts. Follow the directions precisely and keep out of reach of children.

Lugol's Iodine (also called "Lugol's solution") was first developed by the French physician, Jean Lugol, in 1829. It is a transparent brown liquid consisting of 10 parts potassium iodide (KI) to 5 parts iodine to 85 parts of (distilled) water. It is an effective bactericide and fungicide and, in fact, was, for the better part of a century, a common antiseptic - (though it has laboratory uses separate and apart from any medical application). Lugol's and similar iodine solutions probably fell out of favor in the last half of the 20th century due to combination of economics and esthetics: first, it is so cheap to make that it cannot compare to "cleaner," value-added antiseptics with more marketing muscle; and secondly, it will stain clothes and will even temporarily stain skin when used topically to treat a wound. The internal applications of various iodine solutions have been published and discussed for well over a century.

(Updated Oct. 20, 2008 -- this section refers to 3%: ): Our Lugol's dosage and serving size information has undergone considerable revision since we upgraded from our original 4 fl. oz. bottle to the current 8 fl. oz. (236.5 ml.) bottle. The confusion was compounded by a lack of differentiation between supplemental and therapeutic dosages, plus a couple typos of our own . . . So . . . to clarify: Each bottle contains about 47.3 teaspoons (see “How Much Iodine in a Drop?” below). The current label indicates 6,240 drops to a bottle ("Servings per Container"). This calculation was made by multiplying 130 drops/tsp. (which is what we measured in the lab) by our earlier calculation of 48 (rounded) teaspoons per container. But what is a "drop" ? (See Wiki article if you're not confused enough already.) In our calculation at left, we use the "metric drop" to arrive at 1.45 mg. of iodine per drop. So -- in the name of accuracy, since for strictly supplemental purposes, most people will find one drop per day adequate. We provide the following table as an errata addendum:

* -- Calculation is approximate. Physicians wanting an exact measure should plan on a deviation factor of + / - 2%. Our current dropper provides about 18 drops per milligram, thus yielding approximately 10% more than what is indicated above for a "metric drop."

All 1 fl. oz. (30 ml.) bottles of our Lugol's come in hardened amber plastic. The dropper top is sealed to prevent leakage in transit. Be sure to puncture with sterile needle to dispense by drop --- (see arrow above, pointing to dropper top). This should also help any customs problems.

How Much Iodine In a Drop?

Distilled water, potassium iodide, iodine crystal. The ingredients in our Lugol's (all variations) are pharmaceutical grade (BP / USP / EP). A new entry in this product's MSDS provides sourcing information. Email us if you have further questions.